THE UNIVERSE OF VOICE 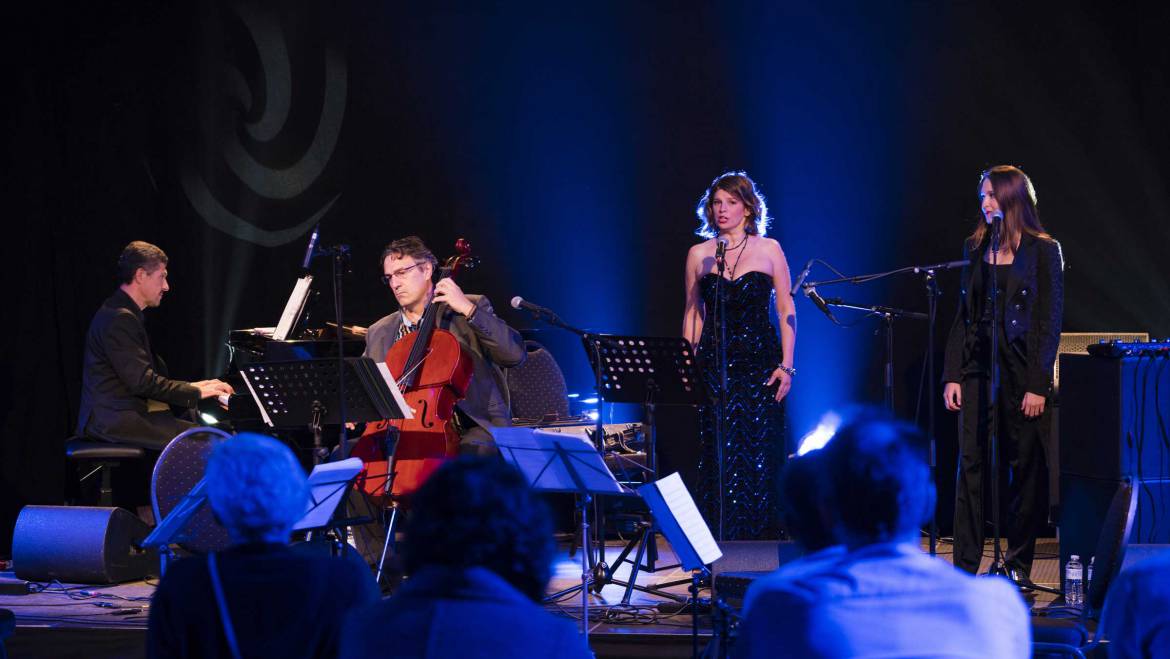 “THE UNIVERSE OF VOICE”

Here on stage the East meets the West, the North greets the South. The past, the present and the future merges into a beautiful melody of self-gravitating spheres. Music of different cultures enters magnetic fields of electronic music, thus creating a fascinating whirl of layers. The wildness of nature floats in uncountable waves of unchannelled sounds.

This is a journey through far-off landscapes. Landscapes drenched into the light of a vast spectrum of various genres from ethnical to electronical, classical to jazz, hip-hop to soul music. You will dive in the history of the universe through sounds and music, observing the beginning of our existence guided by the most ancient instrument — the human voice.

Two singers with contrasting styles will accompany your journey – coloratura soprano Olga Bolgari from Moldavia and beatbox master Aygyul from Kazan, Russia. On the loopstation Aygyul will explore the formation of sounds all across our ever expanding universe. Aygyul will experiment with Olga Bolgari by connecting different universes in genres like jazz and hip-hop.

The soundsphere created by “The Universe of Voice” echoes the melody of space and nature´s rhythm. Streams of dynamic thoughts and feelings will be delivered by this outstanding voices and will fill you with harmony, peace and confidence.

AYGYUL is born in Kazan/Russia and already in her early childhood she studied classical singing and flute. As teenager she won several important competitions and also the prize of the Russian president. She developed her singing classes and learned pop, hip-hop, soul and rock. Furthermore, she became one of the five best female beatboxers in the world. Her additional specialties are DIY-MUSICIAN, SOUND ARTIST, LOOPING MASTA and MUSIC CATCHER. In the last two years she is studying in Vienna, after one year in the classes of Olga Bolgari she won the special prize at the VOICE competition in Vienna. She was performing at the opening of the FINA – World Championship in Kazan in 2015, as well as at the famous stages in Russia and Europe. 2016 she created her new program SOUND SPHERE, which was performed together with THE UNIVERSE OF VOICE.

Olga Bolgari enjoyed a wide-ranging musical education in Moldavia and in Austria/Vienna. At last she studied Opera and Operetta at the Vienna Conservatory and Vocal Education at the University of Music Vienna.
Since 1997 she has worked internationally as a concert and opera singer. She performed oratorios, concert arias, Lieder and baroque programmes with various ensembles in Italy, Argentina, Mexico, USA, France, Portugal, Cyprus, Germany, Latvia and Austria. From 2009 to 2011 she was engaged at the Municipal Theatre of Baden. Since 2012 she is working at the Vienna Conservatory, conducting choir, singing concerts and developing her own holistic voice systems. Since 2016 she became teacher of the MusikInstitut Wien, where she collaborates with the band members of THE UNIVERSE OF VOICE.
Peter Illavsky studied music in Austria, Italy and USA. Since 1991 he performs internationally as a concert and chamber music cellist. In Spain he performed with the Orchestra of Cadiz,
Orchestra of Granada, Orchestra of Malaga, Orchestra of San Sebastian a large number of baroque cello concertos. He played at the famous Arena di Verona, in South Africa with the National Orchestra and Los Angeles together with Barbara Streisand. In 2007 he founded the Music Institute in Dresden and developed a new technique for singing cello players. This results in a wide variety of new compositions thus enhancing the repertoire for cellists around the world. In 2016 he co-founded with the band members of the “Universe of Voice” the Musikinstitut Wien.

Ruslan Pashynskyi is music pedagogue, multi-instrumentalist (saxophones, clarinet, ethnic flutes, piano) active in the classical, jazz and world music genres. He obtained a degree with teacher’s diploma in pedagogy, conductor and arranger at the „Kiev National University of Culture and Arts“; did 2 years Doctorate in pedagogy. In Kiev, he worked in the ’90s as a teacher, arranger and musical director at the „Art School“ in Kiev and the „Kiev National University of Culture and Arts“. He promoted several projects to advance jazz culture in Kiev. In 2007 he moved to Italy where he continued teaching at music schools, elementary schools and universities with music education courses and propaedeutic with his projects as „Sounds and Rhythms“ and „OM-S“ (Spontaneous Music Orchestra) – for children, students and teachers.

Since 2011 in Austria he cooperates with international kindergartens and schools for children with learning disabilities. As a performer he takes part in various concerts and festivals (France, Monte Carlo, Germany, Belgium, Holland, Italy, Austria, Greece, China, Mongolia, Russia) and collaborates with artists of national and international scene.